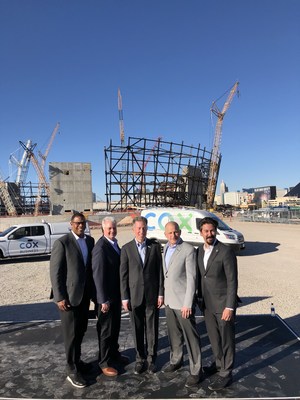 "With a rich history of powering the largest stadiums, hotels and convention centers – many right here in Las Vegas – we're excited to work with Cox on the next evolution of the connected fan experience," said Marc Badain, president of the Raiders.

As the silver and black prepare to settle in Las Vegas, Cox is ensuring both fans and the Raiders organization will have an effortless online experience at the NFL's newest stadium and practice facility. Cox will also power interactive technology activations for fans during every home game and is an official video television provider of Las Vegas Stadium.

"Las Vegas is the sports and entertainment capital of the world, but it's also becoming one of the smartest, and most connected cities in the world," said Pat Esser, president, Cox Communications. "The new Las Vegas Stadium will perfectly complement this progression and could become the smartest gridiron yet."

As a Founding Partner, Cox will participate in community events and sponsor an annual program that highlights entrepreneurship and innovation. Cox Media will also sponsor the state-of-the-art media studio at the Raiders practice facility in Henderson.

Cox Business (and its Hospitality Network group) serves more than 90 percent of the hotel and convention space on the Las Vegas Strip today, the Las Vegas Convention Center, UNLV's Thomas & Mack Center and is the exclusive technology integration/ telecommunications services provider at T-Mobile Arena, home of the Vegas Golden Knights, and the technology sponsor at Las Vegas Ballpark, home of the Aviators. Cox also supports the NFL's Arizona Cardinals as exclusive technology provider at State Farm Stadium and is the official telecommunications partner of the New Orleans Saints.

About Cox Business
The commercial division of Cox Communications, Cox Business provides voice, data and video services for more than 355,000 small and regional businesses nationwide, including health care providers; K−12 and higher education; financial institutions; and federal, state and local government organizations. The organization also serves most of the top-tier wireless and wireline telecommunications carriers in the U.S. through its wholesale division. For more information, please visit www.coxbusiness.com.

About Cox Communications
Cox Communications is committed to creating meaningful moments of human connection through broadband applications and services. The largest private telecom company in America, we proudly serve six million homes and businesses across 18 states. We're dedicated to empowering others to build a better future and celebrate diverse products, people, suppliers, communities and the characteristics that makes each one unique. Cox Communications is the largest division of Cox Enterprises, a family-owned business founded in1898 by Governor James M. Cox.

About Las Vegas Stadium
Located adjacent to the world-famous Las Vegas Strip, with construction scheduled to be completed in the summer of 2020, Las Vegas Stadium will become a global events destination, highlighted by the arrival of the NFL's iconic Raiders who begin play in Las Vegas that fall.  Las Vegas Stadium will be ideally located for both visitors and locals, fully enclosed and climate controlled with a capacity of 65,000.  The technologically advanced stadium will host world-class entertainment including globally recognized sporting events, concerts, as well as be the future home of UNLV Football.  The Las Vegas Stadium project is expected to generate an economic benefit of $620 million annually, while creating 6,000 permanent jobs in Southern Nevada.